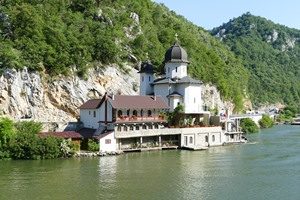 One of the top travel trends that I talked about on my previous article is River Cruising, which has really boomed over the last two years.

“A river cruise represents life in the slow lane, sailing along at a gentle pace, soaking up the scenery, with plentiful opportunities to explore riverside towns and cities en route. It is a supremely calming experience, an antidote to the pressures of life in a fast-paced world, in surroundings that are comfortable without being fussy or pretentious, with good food and enjoyable company.” (Wikipedia)

Unlike Ocean Cruises, a River Cruise Ship is a lot smaller – the largest vessel could probably carry around 200 passengers max.

Of course, Europe has been the most popular route but there are also lots of River Cruises that cover more exotic destinations like Asia, Russia and Africa.  If you don’t want to leave the US, you can go for River Cruises in Mississippi and the Peruvian Amazon.

Aside from different destinations and routes, there are also a variety of styles and themes to choose from.

Here are some of 2017’s Best River Cruises, according to Telegraph, Britain’s daily broadsheet newspaper.

The Rhine River in Europe is a waterway that flows through Switzerland, France, Germany and the Netherlands.  With castles, medieval churches, quite canals and vineyards appearing on each bed of the river, you’ll surely feel inspired with the romance and beauty that the Rhine River radiates.

For beer connoisseurs, hop on a beer-themed river cruise that tours around different beer regions in Austria, Belgium and Germany.  Learn about European beer-brewing techniques and attend special beer tastings while on a vacation!

Make a voyage through the heart of Russia and see the cultural landmarks and experience St. Petersburg, Moscow and Yaroslavl.

Michelin-starred restaurants, wine-tastings, beaches of Normandy and a few nights in Paris?  Sounds like a dreamy cruise adventure.

If you’re planning to take a cruise during the yuletide season, Christmas cruises will take you Vienna’s largest Christmas markets and enjoy Europes jolly holiday vibe.

Now if you want to explore different parts of Asia, a Mekong Cruise will take you around Laos and Thailand to see jungle villages, sacred Buddhist caves and so much more.  There’s also another cruise that flows through China, India and Bangladesh, where passengers can visit remote villages and temples, and see different animals like Asian elephants, tigers, golden langur moneys and rhinos.

If you want a more intimate cruise vacation, a River Cruise would be the ideal adventure for you.

Toni is a contributing author. In addition to writing about the Baby Boomer generation, she also likes to write about relationships and health.
View all posts by Toni Marie →
This entry was posted in Introduction. Bookmark the permalink.