(Author’s note: I am currently cruising around in the Caribbean, and so my internet access is spotty enough – and expensive enough – that it’s a challenge just to get a blog post up. Pictures are out of the question, but I do have some good pictures and I’ll be uploading and updating when I get home at the end of the week. This also means I don’t have good enough internet access to do any meaningful research on any topic, so this p 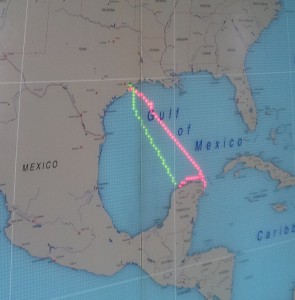 ost is full of my own impressions and that’s pretty much about it! Wish you were here!)  Update:  Home now; here’s where I’ve been!

Sitting in the library of the Carnival Triumph last night, I was hiding from the overwhelming loudness of the featured on-stage performer just outside the door, and enjoying eavesdropping of a sort on a table full of twenty-somethings talking about their cruise so far. It was only the second night of a five-night cruise, but they were fully in the swing of the activities. The thrust of their discussion was about how to get the perception of cruising changed from being an “just for old folks” activity to something cool for the only people that count (aka: them). From their looks, I am guessing they had anything north of 45 in mind when thinking “old folks.” So, I got to wondering: why IS cruising considered to be an old person’s activity, anyway? Maybe it makes sense to think that of the old-fashioned cruise liners like Cunard, where standards of dress (and especially decorum) are held to a high and strict standard. But on a modern, active ship like the Carnival Triumph (and all its sister ships) or Royal Caribbean, I can’t imagine what hold they think the “old folks” have on “their” cruise, anyway. As a matter of fact, some of the things I have seen on this cruise make me wonder whether we old folks are even welcome, though, as the generation with the most disposable income (at least for now) I like to think we still have a little bit of clout with the cruise industry.

However, because of the facts of life regarding mortality and all that accompanies it, it really is important that cruising have plenty of appeal for younger people and families, or the industry will die and a lot of stockholders will go under with it.

To that end, on this ship I see lots of families together, of all nationalities, even though school is in session (I have to wonder what these parents are thinking, pulling their kids out of class at the very beginning of the school year, but that’s another post entirely). There are lots of college-age students as well, but college hasn’t officially started yet. The hairy-chest contest appears to still be in full swing, too. Although I haven’t “enjoyed” observing it myself, I did hear a lady older than I am rhapsodize over all the fun on the lido deck where those types of competitions are played out. And it’s a given that the beer industry is well situated into perpetuity, if for no other reason than cruising. I walked by the pool today and honestly didn’t see a person over 21 in or out of the pool without a beer or a drink of some kind in their hands. There is certainly more than a nod made to the elevator-music industry in the buffet, area, though, with hits from every era, and last night at the dining room they played one selection, Moon River, about a hundred times. Literally, they played the same song over and over again for the entire time we were dining, and now, just having come from the dining room, I can tell you they played…Moon River over again, and again, and again.

So, what’s the future of cruising? I don’t really know, but it appears to me that there’s still plenty of disposable money in the hands of those who are interested in buying a cruise, both young and old, and the kids coming up are going to figure out how to make sure it happens for them, too. Literally, there’s something for all of us, both young and old – not just the old folks. So, here’s a salute to the young, but also a hope that they don’t think they can just take over the cruise industry, at least not just yet.

There’s still a bit of cruising left in this old gal, and probably the same is true for the hundreds of baby boomers I see on the ship today!

This entry was posted in Relationships, Retirement, Travel. Bookmark the permalink.