Considering Plastic Surgery? Be sure to check out your doctor!

Are you considering plastic surgery? As our generation gets older and the skin starts to do the inevitable, even if we haven’t gained or lost a lot of weight, the signs of aging eventually show up. There are the wrinkles, that “thing” that hangs under the neck, the love handles that are just a bit too much to grab, floppy skin on the legs, arms and, well, let’s don’t even go there with the boobs! Gravity is a great idea, except when it comes to skin. 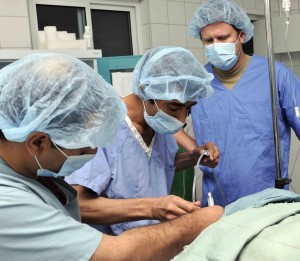 We Baby Boomers are often thought to be a rather spoiled lot. We got a lot of attention as babies; our mothers were (for the most part) still home taking care of us. We are such a large part of the population that, as a whole, we are credited with many accomplishments, whether or not we actually achieved them. Unfortunately, we are also often blamed for many ills of society. One of those ills might be considered our overwhelming vanity, especially since the rise of the fitness industry.  it’s hard for me to think why we should be “faulted” for wanting to look our best!

Plastic surgery isn’t new to everyone in the Boomer generation – many have been partaking of its benefits for years. I am sure you have seen not only the great results, but also the horror pictures of some surgeries gone wrong, of too many surgeries, of faces that look as though they got stuck in the Mr. Potato Head factory – and that’s on women! Surely, though, we can find a happy medium when considering plastic surgery.

I think, once the decision has been made to have some sculpting or lifting done, there are some steps you need to take to make sure that you don’t end up looking like you are one of those who came from the Mr. Potato Head factory!

First, you should realize that any doctor with an M.D. degree is allowed to perform plastic surgery – even a psychiatrist! Now, I’m not saying that you need to worry about a bunch of psychiatrists all going crazy and jumping on the surgery bandwagon, but what I am saying is that you need to make sure the surgeon you choose is board certified in plastic surgery! Also, you should check his record of malpractice judgments, just in case.

Second, it’s a good idea to find a plastic surgeon that performs most of his work on the boomer generation, because he will be more familiar with the characteristics of aging skin, and be sure he performs a lot of the particular type of surgery you are contemplating, as well. The one thing that makes more difference than almost anything else in surgical outcomes is the familiarity of the surgeon with the type of patient and the frequency of surgery he or she is performing. Also, keep in mind that you don’t necessarily want several procedures performed at once, even though it might save you money. Remember, more procedures done at one time will enhance the doctor’s income, and if he suggests it strongly, that might be a warning flag.

Third, ask a lot of questions concerning the anticipated outcome and possible risks of your surgery. Surely, if you are planning this big step, you have a lot of questions that need to be answered before you give any doctor the nod. Also, you need to bring a friend or family member who will remember things you forgot to write down, both when asking questions and when receiving the answers from the doctor. You need someone, if possible, who isn’t easily charmed by the doctor. Don’t forget to ask in detail exactly what to expect after the surgery: any hospital stay, medicines or restrictions in activity should be carefully and thoroughly explained.

Fourth: even if the doctor has his own surgical clinic (which should, nevertheless, be accredited), ask where he has hospital privileges. If the answer is “nowhere,” this is probably a doctor you want to avoid, because you have no way of knowing his background, and any hospital where he has privileges is likely to at least have performed a background check.

Finally, pay careful attention to any suggested shortcuts or possible suggestions of misrepresentations to your insurance company. I can promise you that if he will lie to them, he’ll lie to you too.

So, check all the above before you get too far into the process. Consider your search for a surgeon only an investigation, not a commitment to any set plan of action. If plastic surgery is, in the end, a good idea for you – and it’s not for everyone – going about it in a calm, ordered manner is much more likely to result in the cosmetic enhancements you are hoping for.

This entry was posted in Attractiveness, Health and tagged board certified, physician, plastic surgery, skin, surgeon. Bookmark the permalink.