What’s the most scary part of Hallowe’en? 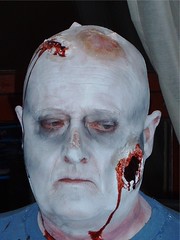 Hallowe’en, or All Hallows’ Evening, is a traditional night of children (and some not-so young folks) dressed as spooks & goblins roaming the streets begging for candy or treats (“Trick or Treating”).

A lot of those spooks & goblins will typically be wearing costumes that partially block their vision, and increase the likelihood that they may be injured or even killed during the traditional rounds of the neighborhood after dark. Worse, a lot of costumes are not very visible.

The thing that should really scare you about Hallowe’en is the dramatic increase of pedestrian deaths on that night.

A child’s risk of being killed by a car is worse on Hallowe’en than on any other night. The added risks generally cause 4 or 5 additional pedestrian deaths on that one night. While 5 “extra” deaths may not seem such a big deal, if one of those 5 is your child (or grandchild), it certainly is a big deal.

When Hallowe’en falls on a Monday, Tuesday, Wednesday, or Thursday, it’s even worse. This year, it’s on a Thursday.

If you are taking the kids (or grandkids) out trick-or-treating this Hallowe’en, please observe the following precautions:

The most important thing you need is situational awareness. Always be aware of any potential threat to your young charges (or yourself).

Of course, the typical bounty of unhealthy sugary junk collected that night can be another problem, but that is relatively minor compared to the risk of being struck by a car. Just use some common sense when portioning out the sugary stuff.

…and have a safe Hallowe’en!

This entry was posted in Children. Bookmark the permalink.