10 Lucky Foods for the New Year

Posted on December 22, 2015 by Toni Marie
Please share with your friends... 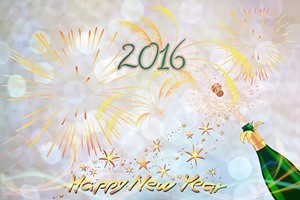 In a few days, we will be welcoming the New Year and we all celebrate it differently according to our family’s and country’s traditions.  But what’s common to all cultures is the belief that some food can actually bring luck, prosperity and wealth.

Here’s an assortment of lucky foods that you can add to your New Year’s Eve 2016 menu.

Fish are considered a lucky food because their scales resemble coins (money), travel in schools (prosperity) and they swim forward (progress).

Pork is said to be the luckiest food to eat on New Year because pigs are rotund and their noses root forward which represent prosperity and progress as well.  This tradition is practiced in Cuba, Spain, Portugal, Hungary and Austria.

Lentils and other kinds of beans also resemble money.  This is a very popular tradition in Brazil and Italy.

If you want 2016 to be a year in full circle, then prepare ring-shaped treats such as bagels, donuts or ring-shaped cakes.

In Japan, noodles symbolize long life if you eat them without chewing or breaking.  Make sure to slurp some this New Year’s Eve.  In China and other Asian countries, it is also customary to prepare a dish that has noodles in it during birthday celebrations for the same purpose.

Some countries, including the Philippines, prepare 12 or 13 round fruits to welcome the New Year.  This signifies prosperity and the number represents each month of the year.

Grains such as rice, quinoa and barley bring luck as well as it symbolizes abundance.

A common tradition in Germany, Poland and Scandinavia, this is believed to bring fortune because its silvery scales resemble silver coins.

A favorite in Southern USA, its color resembles that of gold which is believed to bring your home a prosperous year.

Toni is a contributing author. In addition to writing about the Baby Boomer generation, she also likes to write about relationships and health.
View all posts by Toni Marie →
This entry was posted in Food Finds, Recipes. Bookmark the permalink.