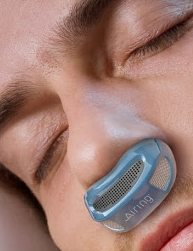 I first heard about Airing over a year ago, when the first fund-raising campaign was announced. I found it intriguing, especially since I have been a CPAP user since before most of the current sleep specialists in the so-called “medical” profession finished potty-training.

For nearly three decades, I have spent (almost) every night with a mildly-uncomfortable contraption strapped to my face that enabled me to breathe and sleep at the same time. On those nights when I could not use my CPAP (equipment failure or power failure), I didn’t get any useful sleep. I can certainly testify that if you have sleep apnea, you can accommodate to nearly anything that at least temporarily lets you get good sleep.

Sleep apnea has become practically an epidemic, for a variety of reasons. One major reason is the really wretched and dangerously wrong dietary advice the so-called “medical” profession has been pushing for nearly half a century now, which has caused a number of health issues in the population, just one of which is sleep apnea. But that’s a discussion for probably more than one other article.

This new CPAP is being presented as “The world’s first hoseless, maskless, cordless, battery-powered micro-CPAP device” which is quite a feat of engineering. All of which is really great.

Except for one little thing…

There is something that is more important than solving a problem correctly. Namely, solving the correct problem. And I don’t think the Airing solves the right problem(s). The problem they are working on is a hoseless, maskless, cordless, battery-powered CPAP, and it appears that they are doing a good job of making something like that happen.

But the real problem is how to provide a sleep apnea patient with a good, restful night’s sleep over the long term. Among other things, that would require a device that is affordable. The Airing will not be affordable. With the current state-of-the-art battery technology, this micro-CPAP will cost somewhere north of $70 (and probably more than $100) per month to operate. Especially since it is designed to be disposable.

Another problem with the “maskless” approach is the very fact that there are more than 50 different mask designs currently in production shows that one size definitely does not fit everyone. In fact, in the time I have used CPAP, I have gone through more than 10 different masks myself — usually, a mask will work quite well for a year or so, then problems will surface. I have had masks that made my front teeth recede. I used “nasal pillows” (similar to what you see in the feature photo at top left) for about five years before they expanded the openings of my nostrils to the point where they were larger than any available nasal pillows I could get. I used masks that worked fairly well for me, but made enough noise that my wife had to sleep with earplugs. I currently use a full-face mask, which works ok, but I hope to get something better next year.

Yet another problem, at least for me, is that there is no provision for a heated humidifier. If I spend more than one night without a humidifier, my sinuses start to crack and bleed.

While the Airing promises to address some of those issues, it will do so at a ridiculously high financial cost. And I suspect that insurance companies will balk at the price. This is no longer the 1990’s, when CPAP technology came with a $5000+ price tag.

Right now, I’m using a very modern design Bi-PAP with a built-in heated humidifier. It features monitoring of my breathing and recording on a flash drive. It retails for about $400, and has an expected service life of about 4 to 5 years (or $100/year). The mask and heated hose retail for about $200, and I replace masks about every 18 months (another $125/year or so). The unit I have has a battery adapter, so that in the worst case, I can plug it into my truck’s accessory outlet. All of that for a fully loaded cost of about $225 per year, including the electricity to run it.

I think that the Airing is going to have a very small niche in the market, which will ultimately die out completely.

It would be nice if I’m wrong about that, but I expect the Airing project to fail, probably in at most a couple of years, when they burn through all of their initial funding, and find that they don’t have enough customers to sustain a profitable business.

Even so, I hope that the Airing project leads to improvements in CPAP technology.

This entry was posted in Health, Useful Gadgets. Bookmark the permalink.